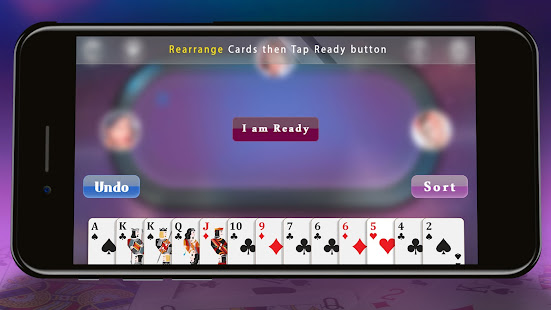 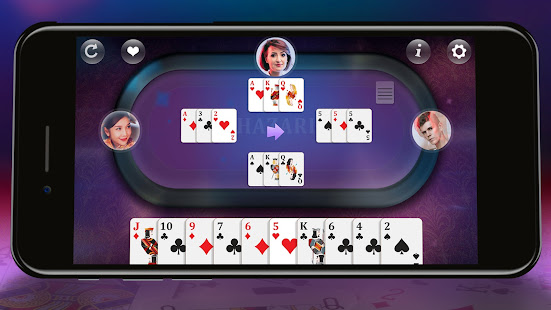 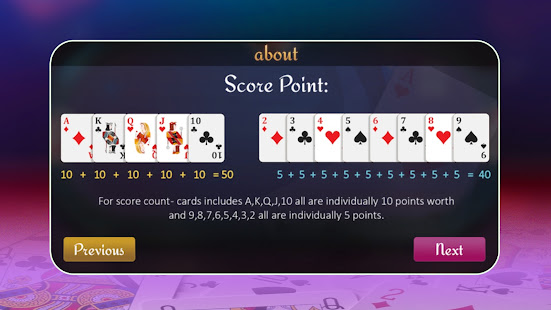 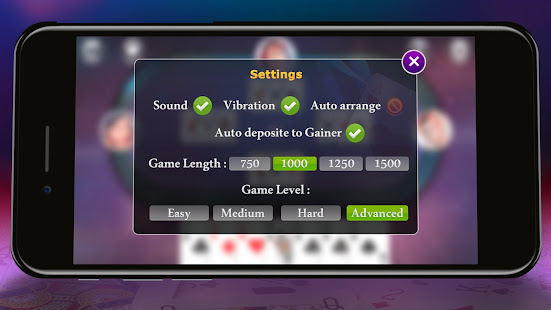 About the Hazari game:
Hazari is 13 cards brag game where user arrange cards into 4 groups. Hajari is a 4 (four) players card game with a standard 52-card deck. Players get time to arrange their cards in order from higher to lower. When a player finishes his ordering or arranging his cards from Higher to Lower he Calls up. When the four players are UP, the first one from the right of the Dealer who dealt the cards starts to throw the cards. The higher card Value wins or takes all the cards and throws again the next three cards in power order. After all the cards are thrown on and taken by the winning players they are then counted, who got how much. Cards ranging from ACE (A) to 10 (ten) all are 10 points and cards from 9 to 2 all are 5 (five) points. That includes A,K,Q,J,10 all are 10 points worth and 9,8,7,6,5,4,3,2 all are 5 points. The winner is the one who has collected 1000 points all together after playing many games. If a player throws a card and the card is thrown the same by another player the second beats the first. For example, if player 1 throws AKQ of HEARTS and the second player throws 678 of SPADE and the third player throws AKQ of DIAMONDS and the fourth player throws 55J of Hearts. The winner is AKQ the third player, who takes all those cards for himself.

COLOR – any three cards of the same suit, the highest card determines the rank

INDIVIDUALS – any cards not belonging to the same group or color or arranged.
Like 5(hearts) 7(spades) 9(diamonds), they make up nothing just the highest card is 9.