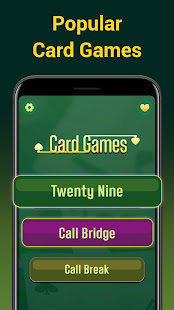 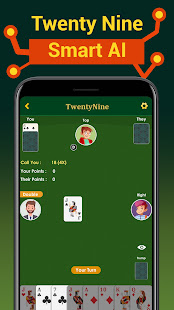 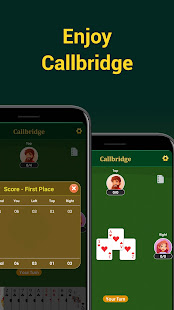 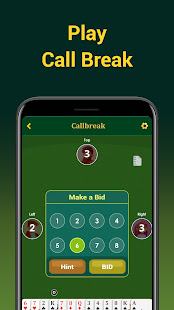 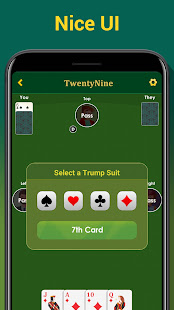 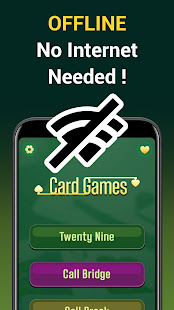 About Call Bridge Card game:
Call bridge seems to be related to the North American game Spades. This game – Call bridge is played using a standard international 52-card pack. The cards of each suit rank from high to low A-K-Q-J-10-9-8-7-6-5-4-3-2. Spades are permanent trumps: any card of the Spade suit beats any card of any other suit. Deal and play are counter-clockwise. A player must win the number of tricks called or more tricks than the call. If a player succeeds, the number called is added to his or her cumulative score. Otherwise, the number called is subtracted.

About Call Break Card game:
In the Call break card game the cards of each suit rank from high to low A-K-Q-J-10-9-8-7-6-5-4-3-2. Spades are permanent trumps in the call break card game: any card of the Spade suit beats any card of any other suit. Deal and play in call break card games are counter-clockwise. After the end of the fifth round, the winner is decided, the player with higher total points is considered as the winner of the game. In this game, score length is a fixed number of rounds, but in Spades game length is based on a fixed score. Others rules and game logic are almost the same.

About 29( Twenty Nine ) Card game:
Twenty-nine – 29 is a South Asian trick-taking game in which the Jack and the Nine are the highest cards in every suit.

Players
This game is usually played by four players in fixed partnerships, partners facing each other.

Deal and Bidding
Deal and Bidding are anti-clockwise. Cards are distributed in two steps by four cards in every step.
Based on the first four cards, players bid for the right to choose trumps. The normal bidding range is 16 to 28.
The bid winner chooses trump.

Scoring
After the end of a round, if the bidding side meets their bid point, their game point will be increased otherwise decreased.

Double:
If the play round is in Double mode, the game point will be increased or decreased by 2.
Non – bidder side can set double after the bidder bid.

Redouble
If the play round is in Redouble mode, the game point will be increased or decreased by 4.
Bidder side can set Redouble after non-bidder setting Double.